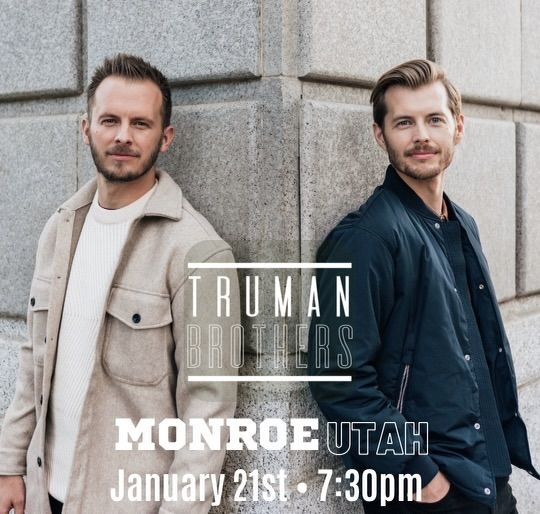 An Evening With The Truman Brothers

The Truman Brothers is a duo out of Nashville, Tennessee, comprised of brothers, Benjamin (vocals, guitar, songwriter) and Chad Truman (keyboard, vocals, arranger, songwriter). These brothers are no strangers to the music business as their father, Dan Truman, was a member of the headliner country group Diamond Rio, and is the co-founder of the famous Nashville Tribute Band.

Ben and Chad were both students at Brigham Young University (BYU) in Provo, Utah. Ben graduated in Finance, and Chad is planning on finishing his degree in Media Music. While at BYU, they won the student-voted Battle of the Bands two years in a row. Their sound is comparable to John Mayer, Maroon 5, Lady Antebellum, Michael Bublé, and Taylor Swift. About their music, Reverbnation.com reports, “Combining a range of influences from Stevie Wonder to John Mayer, the brothers create a sound founded on rich vocals and passionate songwriting.”

Even though having a father who is famous on the music scene has some slight advantages, the brothers have had to prove that they are capable of making it in the business on their own. In a 12 June 2009 Deseret Newsarticle, Ben commented, “For one thing, we’re in a different realm. Truman is pop/rock, not country.” The band formed in 2005, just after Ben returned home from his two-year mission for The Church of Jesus Christ of Latter-day Saints to Mexico. He recalls, “We started to write songs and do some playing. Then Chad left on his mission. While he was gone, I kept writing songs. We like to think that while he was gone for two years, he was progressing spiritually, but the band was progressing as well. In a way, it’s like no time was lost.”

They released their first CD called Hold On to Love at a free block party in a little alley in Provo, Utah, in June 2009 joined by former American Idol contestant Jackie Tohn. The CD, recorded and produced in a studio in their hometown of Nashville, features all original songs written by Ben and Chad, and a third member of the band, Doug Collins.

Following their success in Utah, they began touring across the United States where they shared the stage with such megastars as Imagine Dragons, Kelly Clarkson, Diamond Rio, and David Archuleta. In their brief career, the Truman Brothers have performed in more than 100 cities in 30 states, as well as performances in London, Hong Kong, and the Philippines.

In 2014, they produced and recorded a Billboard 200 charting album and were the opening act for Grammy-winning group Diamond Rio on their Fall Tour. Thus far Truman Brothers have released three albums, Hold On to Love, Somewhere Between, and their newest release, Dukes of Delmont. The albums are available on iTunes. They are also a part of the well liked Nashville Tribute Band. You can listen to some of their songs on their Soundcloudpage.


3. There will be no refunds or exchanges on successfully purchased tickets unless otherwise specified by Disciple Live Events LLC..

All items are non-refundable under any circumstances.

An Evening With The Truman Brothers